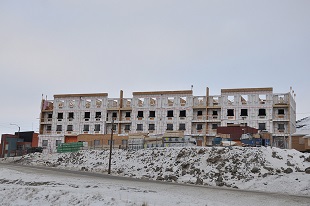 As winter returns to Iqaluit, snow and ice settle on a changed city landscape: six new major developments began construction this past sealift season. That includes 92 residential units and 179 hotel rooms, according to the city’s planning and development office.

But most of the 92 units approved this year may go towards government staff housing, rather than public housing units needed to address the city’s long-standing housing crisis, said Mark Brodrick, Iqaluit’s new director of planning and development.

Last year, Iqaluit needed nearly 200 more units to meet its housing demands, according to the Canadian Mortgage and Housing Corp. Iqaluit also needs as many as 105 new units per year to keep up with its growing population, according to the city’s general plan.

“It’s no secret that there’s a lot of competition for housing and that the city needs more residential units,” Brodrick told Nunatsiaq News.

Brodrick arrived from B.C. about two months ago to fill the director position, which had been vacant for two years, he said from his new Iqaluit office.

So far he has been burying his nose in report after report to learn about the city’s current challenges and plans, Brodrick said. Those include balancing new developments with their impact on current infrastructure, making Iqaluit’s water source more secure, and making the city more livable for everybody.