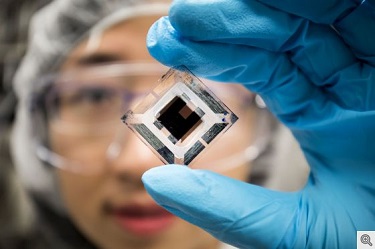 Breakthrough organic solar cell research could be the benchmark for commercialization

This level of efficiency is in the range of many solar panels, or photovoltaics, currently on the market.

But carbon-based organic solar cells could be inexpensively manufactured in rolls that are thin enough to bend and curve around structures or within clothing, and made any color, even transparent, to blend in to their environment.

Despite these advantages, organic solar cells have lacked the efficiency required to compete with conventional energy sources.

“For the last couple of years, efficiency for organic photovoltaics was stuck around 11 to 12 percent,” said Xiaozhou Che, a doctoral candidate in the Applied Physics Program and first author of a new study published in Nature Energy.

To break them out of this rut, the researchers combined multiple advancements in design and process.

Keep reading in the University of Michigan News