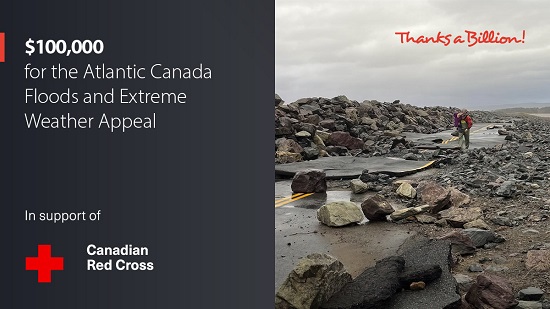 The Brandt Group of Companies has announced that they have partnered with the John Deere Foundation of Canada to make a $100,000 donation to the Canadian Red Cross. The contribution is being made in direct support of communities impacted by Hurricane Fiona, which ravaged portions of five provinces as it swept through Atlantic Canada on September 24/25.

“Hurricane Fiona hit very close to home for us here at Brandt,” said Brandt CEO, Shaun Semple. “We have deep roots in Atlantic Canada and have been eager to support the people and communities that were devastated in last month’s storm.”

Hurricane Fiona was a powerful tropical cyclone that was the most expensive natural disaster in Canadian history. It will take months to restore critical infrastructure and estimates of property damage and long-term economic loss are currently reaching as high as $4 billion. Both Brandt and John Deere have employees and customers who live in the storm-ravaged areas and Brandt has 13 branch locations in the affected region, serving hundreds of local customers that are actively working on the recovery.

“It is very important for people in those communities that have undergone such widespread destruction to know they are not alone,” said Greg Tooke, President of John Deere Canada. “John Deere and Brandt are proud to stand together in support of the people of Atlantic Canada in this difficult time.”

Community support has always been an integral part of Brandt’s business philosophy. The Hurricane Fiona donation is being made in conjunction with Brandt’s Thanks A Billion philanthropic program. In the past decade, the TAB program has distributed more than $22 million to disaster relief and community initiatives in 250+ communities across Canada.