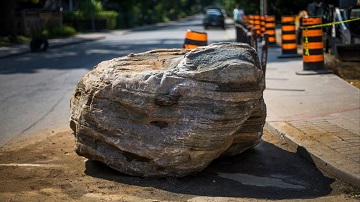 As reported in the Montreal Gazette, Toronto’s never-ending construction has turned up a really big rock — a boulder believed to be a billion years old.

Construction crews working on the century-old water main along Bloor St. W., between Bathurst St. and Spadina Ave., found the relic while jack hammering on Wednesday.

The 2,000 kilogram granite boulder is estimated to be between 1.2 and 1.5 billion years old, says the Bloor Annex Business Improvement Association.

“U of T expert professor Joseph Desloges says the rock likely traveled here from Georgian Bay lodged in an iceberg … when Lake Iroquois dominated the landscape. As the iceberg melted the rock fell approximately 150 feet to the lake bed now called the Annex,” the Bloor Annex BIA Tweeted.

There are new parkettes being installed along Bloor that have been designed to have granite park benches, said Briam Burchell, chairman of the BIA.

Ironically the parkettes are being designed to have a cottage feel, so one will have real granite from up north, he said.

“Our granite boulder will be incorporated into one of our new parkettes at Howland and Bloor,” Burchell said. “It’s a win win for us.”

Construction worker Darryl McKenna said excavating the rock put the day three hours behind schedule and forced crews to dig out more of the road.

Watch the news video on the Montreal Gazette website