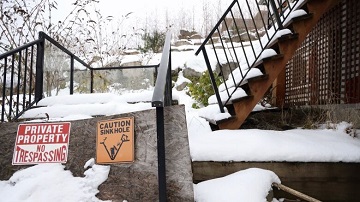 BC homeowners sue province and developer over sinkhole-ridden neighbourhood

As reported on CBC News, Rod Goy says he and his wife, Donna, wanted their new home to be a gathering place as they settled into retirement and watched their family grow.

The couple has five children and three grandchildren, with a fourth grandchild on the way. Rod and Donna envisioned their expanding family meeting two or three times a year at the oceanfront house they bought with their life savings in Sechelt, B.C.

It would have been a chaotic squeeze, but the best kind.

Instead, the Goys found themselves dealing with a different kind of chaos.

“It’s been the worst experience my wife and I have ever endured,” Rod Goy said Thursday.

The couple’s dream home and the entire Seawatch neighbourhood, sitting on the hill above the west side of Sechelt Inlet on the Sunshine Coast, have been plagued by sinkholes. Entire front lawns have dropped below sidewalk level and stairs have buckled because of shifting foundations.

Residents were ordered to evacuate on Feb. 15 due to the risk of landslide. They have not been allowed back home.

The Goys are among a dozen homeowners now suing the district and the province, saying officials knew the ground beneath the development was hazardous when they approved the development. They’re claiming damages for essentially worthless homes and compensation for mental anguish.

“My wife and I are having difficulty sleeping,” said Rod, 64, speaking by phone from a rental house.

“It’s tiring, it’s stressful, it’s created a lot of anxiety and depression — not just among us, but the entire group of people,” he added, speaking about his neighbours. “There is no end in sight. None whatsoever.”

In eight lawsuits filed last week, the Goys and other homeowners allege the geotechnical hazards underneath the subdivision were no mystery to the district when the development was approved in 2006. Court documents claim the district was negligent in approving their homes, and continually negligent by ignoring problems as they cropped up during construction.