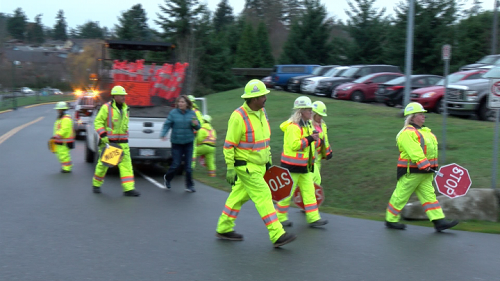 B.C. traffic flagger dies from injuries after being hit by car

A traffic flagger hit by a car last month while working in the North Okanagan has died from her injuries after nearly three weeks in hospital.

On Nov. 17, the 66-year-old woman was injured when a driver failed to stop near an active work site on Highway 6 close to Lavington, B.C.

The woman was airlifted Kelowna General Hospital in critical condition, but died from her injuries on Wednesday, according to the owner of Okanagan Traffic Control.

“I just know that today is a terrible day and that a lot of people are grieving,” said owner Traci Jeeves.

Jeeves identified the worker as Isabelle Bourroughs, a resident of Enderby, B.C. The day she was struck was her 66th birthday.