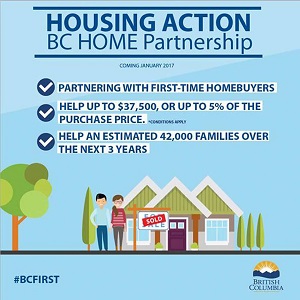 The province announced in the 2018 budget that the $700-million program, which was launched by the previous BC Liberal government, was being axed — to be replaced with a new program to promote the construction of affordable housing.

The NDP government is now reminding would-be applicants of the expiry date on the loan program: anyone looking to take advantage of it must apply before March 31.

Under the Home Owner Mortgage and Equity (HOME) Partnership program, first-time homebuyers were able to take advantage of a government loan matching up to five per cent of the purchase price of homes with a maximum value of $750,000.

That maximum loan of $37,500 was also interest free for the first five years.

The program had sparked concerns that it would saddle first-time homebuyers with what amounted to a second mortgage, along with fears that it would add fuel to Metro Vancouver’s already red hot condo market.

But very few people actually took the province up on the offer. B.C. had anticipated handing out about 42,000 of the loans over three years, but in the year since it was implemented, just 3,000 people have signed up, according to the province.