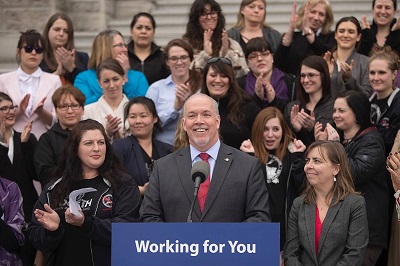 Premier John Horgan says union-only deals for major construction projects are the way of the future, and the replacement of the 80-year-old Pattullo bridge linking Surrey and New Westminster is the “perfect template” for B.C.

Horgan made the comments Thursday at a B.C. legislature ceremony to announce a pilot project to get more women into skilled construction trades.

“I believe that the Pattullo bridge, $1.37 billion, can and will be done with a project labour agreement, a community benefits arrangement, and we’re working on that right now with our partners and making sure that we get an agreement in place that meets the test for British Columbians,” Horgan said.

A typical project labour agreement establishes a work site as union-only, in exchange for a commitment not to go on strike. Horgan said that’s the model for future major public construction, including commitments by unions to meet a quota of apprentices on each job.

The B.C. Liberal government steered the province to open-shop construction, most recently for the early stages of the Site C dam project. Horgan said he has instructed B.C. Hydro to go back to project labour agreements in the future.

Keep reading in the Trail Times