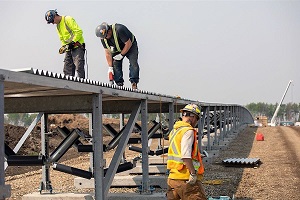 Less than half of B.C.’s construction contractors are expecting more work in 2020, according to a survey released by the Independent Contractors and Businesses Association Wednesday.

The survey found that 40 per cent of the companies in the survey are expecting more work this year, compared to 51 per cent last year. This year represents a five-year low, according to the ICBA, which surveyed 1,000 construction companies.

When broken down by region, the ICBA survey found that 42 per cent of contractors in the Lower Mainland, Fraser Valley and Whistler expected an increase in work, 40 per cent in the province’s Interior, 38 per cent in northern B.C. and 24 per cent on Vancouver Island.

In the report, ICBA president Chris Gardner said the dip represented a “notable drop in confidence.”

Gardner said the reasoning behind that could be because 53 per cent of contractors think government “is on the wrong track when dealing with their businesses.” Just eight per cent said government was on the right track while 39 per cent said they didn’t know.

Keep reading in The Chilliwack Progress