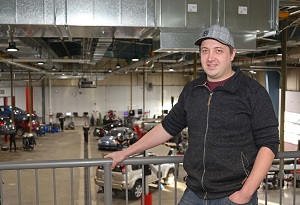 NANAIMO, BC: An overhaul of Vancouver Island University’s (VIU’s) Automotive building is boosting the success of the program.

The renovations are part of the $20-million Marine, Automotive and Trades Complex expansion and redevelopment project announced in December 2016 by the federal and provincial governments.

The Automotive building renovations include a 225 m2 addition with a larger tool crib and an apprenticeship lab; a renovated customer service area designed to look just like a real dealership; a reconfigured shop area that now fits up to 24 vehicles compared to 16 in the former layout; and renovated classroom spaces to promote more dynamic learning opportunities.

“It’s a whole new shop inside,” says Dean Cadieux, Automotive Program Chair. “The building was built in 1972 and the general consensus was it had to be replaced, but the structure is still good, so they kept that and rebuilt everything else to more closely mimic the layout of a typical dealership shop. We treat the program like a business so students get realistic training in a facility similar to what they would find in the workforce.”

Trevor Rea-Stewart, a fourth-year automotive apprentice student, has noticed a huge difference with the renovated space.

“It’s much more open and a lot less crowded,” he says. “Everything is laid out a lot better too – for example, the tool crib is more centrally located so it’s easier to access. It makes me feel like the community cares about this place. The auto industry employs a lot of people in the province. Having a really well-built facility shows that they think it’s important.”

The renovations include a new lab for apprentice students that is separate from the main shop, where the foundation students are trained. The 10-month foundation program prepares students to find work as an automotive apprentice or as a trainee parts person or service advisor, and the apprenticeship program includes four levels of technical training for practicing automotive service technicians who are working towards Red Seal certification.

“Before, we were kind of stuffed in at the end of the classroom with the foundation students,” he says. “Having our own space is important because our training is much more specialized than what the foundation students are learning, so it allows us to focus on our own topics. There’s a lot to learn in the trade – new cars have a lot of technology.”

On top of an improved learning environment, the new configuration and extra space will allow the program to add more students, which Rea-Stewart says will help future students get educated faster – he was on a wait list for two years before getting into the program.

“Our apprenticeship classes are booked more than two years ahead,” he says. “Before our students finish the foundation program, 65 per cent of them have already found work. We are fielding calls weekly from businesses looking for technicians.”

Employers are also excited about the changes. Keith Ladouceur, Fixed Operations Manager for GAIN Automotive Group, which oversees the BMW, Mercedes Benz and Subaru dealerships in Nanaimo, says local dealerships are dependent on the workforce the University produces.

“The automotive industry has changed so rapidly in the last 20 years – the complexities of the systems technicians are dealing with now is staggering,” says Ladouceur, who is also chair of the VIU Automotive Program Advisory Committee, a group of industry professionals that works with VIU to ensure the program remains relevant to industry needs. “This type of work is now dependent on continued learning.”

Not only is education more important than ever, but the industry is experiencing a shortage of trained workers, he adds.

“I’m excited about the increased volume of students the VIU program will be able to handle because we are dealing with a shortage in the workforce,” says Ladouceur. “There will be jobs for students equipped to deal with the realities of the automotive trades. Graduates from the VIU Foundation program and current apprentices have been set up for that new reality.”

The Marine, Automotive and Trades Complex project also includes a new building for the Carpentry program, and renovations to the Heavy Mechanical building to add an LNG/CNG bay and move the Motorcycle and Marine Technician program next door to take advantage of similar technology needs the two programs have.