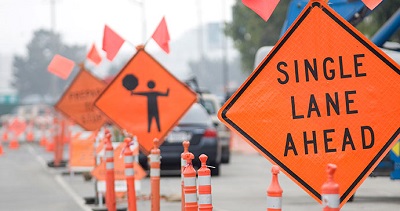 Audi cars will talk to construction zones, starting this year

You may have seen the alphabet-soup abbreviation “V2X” thrown around. It’s the catch-all coinage for “vehicle-to-everything” technology, which essentially lets cars “talk” to other vehicles, fixed objects and infrastructure. Freaky sounding, and super futuristic, right?

Audi is putting the technology on the road this year. The German luxury brand said on Wednesday it will begin joint efforts with the Virginia Department of Transportation to trial cellular V2X technology later this year. Qualcomm is also in on the efforts, and its chipsets will power the C-V2X systems to be used.

The automaker will use the 5.9GHz band the Federal Communications Commission has previously proposed as an allocated band for V2X technology. To start, these V2X trials will revolve around construction zones and enhance Audi’s Traffic Light Information system, which provides drivers with a countdown until the signal turns green.

In construction zones, the system will deliver gradual warnings to an Audi Q8 via a Qualcomm chipset. The final series of warnings will alert the driver to a worker’s physical presence in the work zone. All of this happens seamlessly, with infrastructure communicating the information to the car over the C-V2X band. Audi and the Virginia DOT believe this kind of technology could prevent 6,000 pedestrian fatalities per year in the future.

The Virginia Tech Transportation Institute will assist in developing the software needed for the system to become a reality later this year, and we’ll then see field tests to watch the technology in action.

Audi was one of the first companies to climb aboard V2X technology. Its Traffic Light Info system operates in 25 cities today. One day, this same technology could see cars tell other vehicles about icy road conditions, traffic problems and other hazards to be aware of.