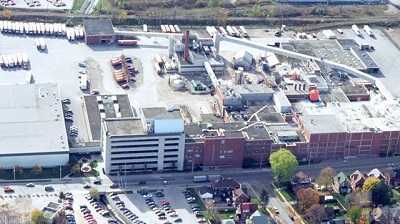 The new owners of the Schneiders lands on Courtland Avenue will begin demolishing parts of the historic meat-packing plant within the next few months.

Preliminary drilling for soil and groundwater testing is already underway at the 27-acre site, and demolition work should start within a couple of months, consultant Glenn Scheels of GSP Group told about 75 people at a public information meeting Thursday about the redevelopment.

The meeting was held to provide neighbours with an overview of the plans for the site, and contacts if they have questions or concerns.

“We’ve lived in the area for almost 30 years,” said Paul Dyson, who remembers when trucks full of pigs headed to slaughter would rumble past his house on Courtland. “We’re excited to see this.”

The 92-year-old packing plant closed in February 2015 and was listed for sale that December. Auburn Developments of London, Ont., announced last fall it had bought the industrial site, which sprawls between Borden Avenue and Palmer Avenue, Courtland Avenue and the Goderich-Exeter Railway tracks.

Scheels cautioned that it could take 10 years or more for the site to be redeveloped. Planning and other approvals will take at least a year, but some construction will likely start in 2019, he said.

Auburn has been involved in a couple of major projects in Waterloo Region: the redevelopment of the former Arrow shirt factory on Benton Street into the Arrow Lofts, and the Barrel Yards project in Waterloo, which includes the Delta Hotel and several highrise condo and rental apartment buildings.

Keep reading in the Hamilton Spectator