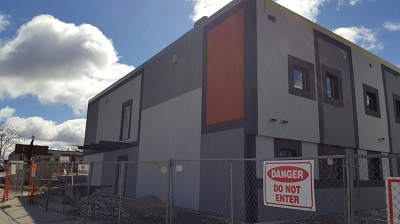 As reported in The Chatham Daily News, the Ministry of Labour is currently investigating after an asbestos complaint was filed about a student housing construction project in Chatham.

Everlast Group Ltd. is building the project at the former YMCA on King Street West, near the Chatham-Kent Civic Centre.

In an email to The Daily News on Friday, the ministry stated an inspector responded to the complaint on Wednesday.

Two orders were issued to the Everlast Group for general housekeeping and for adequate lighting where workers are present.

“One requirement was also issued to Everlast Group Ltd. not to disturb suspected asbestos-containing material in a specific area,” the ministry stated. “Our investigation is ongoing.”

On Thursday, the Ministry of Labour visited the site again. One requirement was issued for Everlast Group to obtain samples, and that no work shall be permitted in the area in question until the required sampling is completed.

Although a “stop work order – do not enter” notice from the ministry could be seen on one of the doors, there is no order actually in place.

“The requirement is for sampling and, as part of the sampling, work can’t be done in that area,” the ministry stated. “The tape used is more for precaution to the workers, not because a stop-work order was issued.”

Everlast Group, based in Brampton, announced in February it is investing $9 million to convert the former YMCA building into a residence that will house 200 international students in the future.

Construction began last November on the project, which is expected to draw students from India and China, and other parts of the world, to St. Clair College.