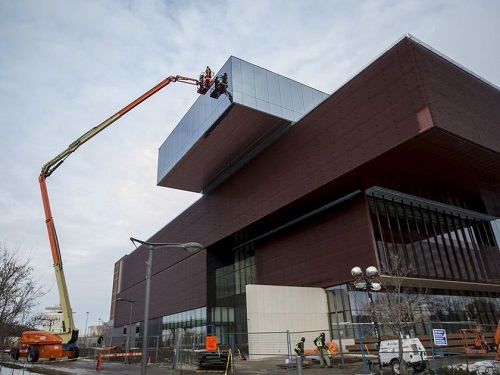 The company hired to build Saskatoon’s new art gallery is preparing for a potential lawsuit by the city and blames a Saskatoon company for construction delays, court documents show.

London, Ont.-based EllisDon Corporation, which was contracted by the City of Saskatoon to build the new Remai Modern art gallery, has sued one of the subcontractors that worked on the gallery project for $2 million.

Two other subcontractors have sued EllisDon over the project.

The most intriguing lawsuit was filed on March 30, 2016 by EllisDon against Saskatoon’s Dynamic Glass & Door Ltd., seeking $2,047,090.32 in compensation. The statement of claim alleges Dynamic, which was contracted to install glass and an exterior curtain wall, failed to perform its work properly and on time.

Allegations contained in statements of claim have not been proven in court.

In addition to the $2 million, the claim against Dynamic envisions a possible lawsuit by the city against EllisDon resulting from Dynamic’s alleged failure to live up to its contract. EllisDon wants Dynamic to pay the possible costs of any successful lawsuit by the city.

“EllisDon states that it is entitled to recover the amount of any liquidated damages incurred by it to the City of Saskatoon under the Prime Contract as a result of Dynamic’s default,” the statement of claim says.

Dynamic filed a statement of defence and counterclaim on May 10, 2016, denying it had failed to perform the work properly or on schedule.

Dynamic further claims it suffered a loss of $1,675,535 and additional lost profits to be proven at trial. The legal dispute moved to mediation on Oct. 12, 2016.

Both the statement of claim and statement of defence agree Dynamic was contracted to do work for $3,565,175. EllisDon says change orders reduced the contract by $328,340, while Dynamic denies this.

EllisDon’s statement of claim estimates the total loss it suffered for having to complete Dynamic’s contract and correct “deficiencies” at more than $3.1 million.

Dynamic’s statement of defence acknowledges the glazing and curtain wall were projected to be mostly complete by September 2014, but alleges the work was delayed due to failures on the part of EllisDon, including “poor co-ordination” by EllisDon of subcontractors and the architect, as well as a lack of clarity and “discrepancies between, missing information from and changes to the specifications, drawings and designs.”

Dynamic also claims EllisDon did not respond to requests for information. Dynamic says as a result of the delays allegedly caused by EllisDon, work on installing the glass and curtain wall did not begin until Oct. 20, 2014. Dynamic says the work it was supposed to perform is better suited to summer months, so doing the work in the winter further hurt production.