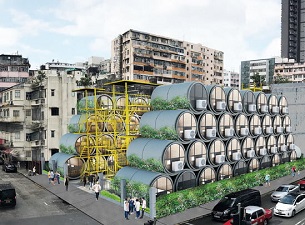 Architects explore “vertical land” to solve homelessness around the world

In an example of truly thinking in three dimensions, architects around the globe are beginning to envision housing in a different way. Dubbed “vertical land,” developers are essentially utilizing scaffolding and three-dimensional printing to build homeless shelters on the windowless sides of existing buildings. It’s a controversial and drastic step towards attacking the homeless crises gripping some of the world’s most populated cities.

One of the newest project proposals is called “Homed,” and it’s already been designed and modeled by New York and Oslo-based innovation studio Framlab. The project, if embraced and enacted by the City of New York, would employ hexagonal-shaped pods with a steel and aluminum exterior and an interior composed of 3D-printed polycarbonate wrapped in wood. Each individual pod would then be stacked in honeycomb-style clusters, supported by the type of construction scaffolding that New Yorkers have been used to for decades.

“This is a response to a host of factors that the typical shelter spaces are unable to provide, many of which are crucial for acceptable qualities of life: privacy, safety, individuality, self-esteem, among others,” writes Framlab on a project overview.

The concept is the brainchild of New York-based Norwegian architect Andreas Tjeldflaat, who began investigating the idea after a conversation with a homeless man on the subway about the conditions in city shelters and the man’s choice to live on the streets instead.