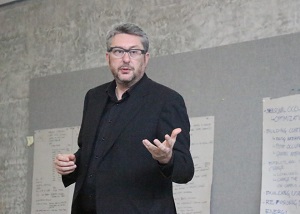 Architect and green building expert returns to his roots in Sudbury

World-renowned architect and expert on sustainable buildings Jason McLennan returned to his roots in Sudbury to share his knowledge with students at the McEwen School of Architecture.

From Nov. 5 to 6, McLennan was a guest in Laurentian University’s Architecture Series, led two workshops, and participated in a roundtable discussion with students.

He has played a foundational role in the green building movement around the globe by creating the Living Building Challenge (LBC).

The LBC is an international sustainable building certification program, design philosophy and advocacy tool developed in 2006.

By promoting the most advanced measures of sustainability in the built environment, the LBC has changed the way we think about architecture.

Growing up, McLennan said, he was always a troublemaker with an interest in pushing where he was told he could not go. Sudbury’s regreening efforts in the 1980s had a profound effect on him, and sparked an early interest in regenerative, restorative architecture.

After studying at the University of Oregon, and later at the Glasgow School of Architecture, McLennan said he was fortunate enough to find mentors in some early proponents of the green building movement.

But he soon realized that what they were doing wasn’t enough.