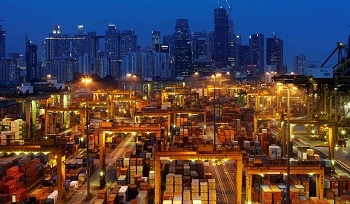 As reported in the South China Morning Post, the desert outside Tennant Creek, deep in the Northern Territory, is not the most obvious place to build and transmit Singapore’s future electricity supply.

Though few in the southern states are yet to take notice, a group of Australian developers are betting that will change.

If they are right, it could have far-reaching consequences for Australia’s energy industry and what the country sells to the world.

Known as Sun Cable, it is promised to be the world’s largest solar farm. If developed as planned, a 10-gigawatt-capacity array of panels will be spread across 15,000 hectares and be backed by battery storage to ensure it can supply power around the clock.

Overhead transmission lines will send electricity to Darwin and plug into the Northern Territory grid. But the bulk would be exported via a high-voltage direct-current submarine cable snaking through the Indonesian archipelago to Singapore, which is more than 4,000km from Tennant Creek as the crow flies.

The developers say it will be able to provide one-fifth of the island city state’s electricity needs, replacing its increasingly expensive gas-fired power.

After 18 months in development, the A$20 billion Sun Cable development had a quiet coming out party three weeks ago at a series of events held to highlight the Northern Territory’s solar potential.

The idea has been embraced by the Northern Territory government and attracted the attention of the software billionaire Mike Cannon-Brookes, who is considering involvement through his Grok Ventures private investment firm.

The Northern Territory plan follows a similarly ambitious proposal for the Pilbara, where another group of developers are working on an even bigger wind and solar hybrid plant to power local industry and develop a green hydrogen manufacturing hub.

On Friday, project developer Andrew Dickson announced the scale of the proposed Asian Renewable Energy Hub had grown by more than a third, from 11GW to 15GW.

“To our knowledge, it’s the largest wind-solar hybrid in the world,” he said.

These developments are still at relatively early stages of planning. Both teams say it will be four years before they lock in finance, with production scheduled to start mid-to-late next decade.

But renewable energy watchers are cautiously optimistic they could help spark a new way of thinking about Australia’s energy exports – one that better aligns with the country’s commitment to the Paris climate agreement, rather than broadening a fossil fuel trade at odds with it.

Opponents to Australia taking significant action on the climate crisis often point out the country is responsible for about 1.4 per cent of greenhouse gas emissions, placing it about 15th on a table of carbon-polluting nations.

A recent report by science and policy institute Climate Analytics makes the case that this underplays Australia’s contribution, which increases by 5 per cent if fossil fuel exports are included.

The latter figure is expected to increase over the next decade. Australia is the world’s biggest exporter of coal and rivals Qatar as the leader in selling liquefied natural gas (LNG).

There is bipartisan support for a significant expansion of both industries, though government economists anticipate export earnings from coal will fall.

Sun Cable’s chief executive, David Griffin, is bullish about the possibility of his company helping power Singapore from the outback in less than a decade.

He said the project would use prefabricated solar cells to capture “one of the best solar radiance reserves on the planet”.

But he said the major transformation that makes the farm possible is the advent of high-voltage, direct-current submarine cable, which he described as the “greatest unsung technology development”.