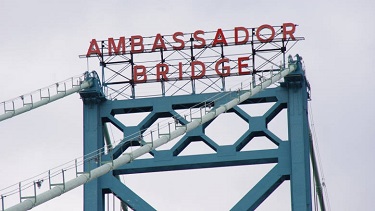 The owners of the Ambassador Bridge have suffered another legal blow in their attempt stop construction of the Gordie Howe International Bridge.

The Michigan Court of Appeal has upheld a lower court ruling against the Maroun family.

Michigan has begun expropriation of the 20 Maroun-owned properties in Delray, Michigan. That’s where the Gordie Howe bridge will touch down stateside.

Lawyers for the Michigan Department of Transportation successfully argued the owners of the Ambassador Bridge missed a one-year statute for claims by failing to file a timely notice following the 2012 crossing agreement between Canada and Michigan.

Jeff Cranson, the Director of Communication for the Michigan Department of Transportation, tells AM800 News the battle may not be over.

“The Maroun’s have the right to appeal further up the line to the Michigan Supreme Court, but either way, the project is full speed ahead,” says Cranson.

The Ambassador Bridge Company has also called on Washington and President Donald Trump to reconsider an exemption granted to the Canadian government which will allow the Gordie Howe International Bridge to be built without the “Buy American” requirement for steel.