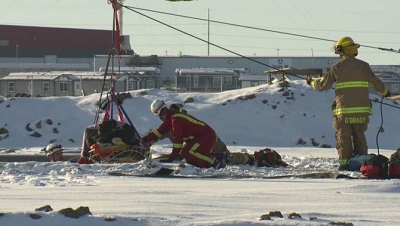 Alberta Labour confirmed to Global News on Tuesday that an investigation is underway at a Lethbridge construction site, a day after a man fell six metres down a manhole.

The rope rescue team was called to the site on Monday afternoon to save the injured worker stuck in a pipe for nearly two hours.

Emergency personnel used harnesses and construction equipment to lift the man to safety.

The extent of his injuries are not known at this time, but Alberta Labour said the victim will be in hospital for more than two days, making an investigation by the province mandatory.

Spokesperson Trent Bancarz said the incident appears to be a true accident where a drainage tunnel is being constructed.

“In this case, our understanding is that he was using the shaft and the ladder as it was designed to be used and he just simply slipped and fell,” Bancarz said.

The victim is an employee of Amec Foster Wheeler, which operates in more than 60 countries, employing around 55,000 people, according to its website.