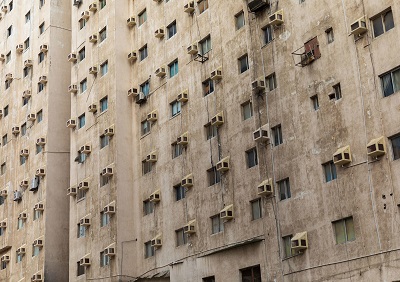 What if air conditioners could help save the planet instead of destroying it?

As blogged on Wired.com, earth’s climate is full of terrifying feedback loops: Decreased rainfall raises the risk of wildfires, which release yet more carbon dioxide. A warming Arctic could trigger the release of long-frozen methane, which would heat the planet even faster than carbon. A lesser-known climate feedback loop, though, is likely mere feet from where you’re sitting: the air conditioner. Use of the energy-intensive appliance causes emissions that contribute to higher global temperatures, which means we’re all using AC more, producing more emissions and more warming.

But what if we could weaponize air conditioning units to help pull carbon dioxide out of the atmosphere instead? According to a new paper in Nature, it’s feasible. Using technology currently in development, AC units in skyscrapers and even your home could get turned into machines that not only capture CO2, but transform the stuff into a fuel for powering vehicles that are difficult to electrify, like cargo ships. The concept, called crowd oil, is still theoretical and faces many challenges. But in these desperate times, crowd oil might have a place in the fight to curb climate change.

The problem with air conditioners isn’t just that they suck up lots of energy but that they also emit heat. “When you run an air conditioning system, you don’t get anything for nothing,” says materials chemist Geoffrey Ozin of the University of Toronto, coauthor on the new paper. “If you cool something, you heat something, and that heat goes into the cities.” Their use exacerbates the heat island effect of cities—lots of concrete soaks up lots of heat, which a city releases well after the sun sets.

Keep reading this blog on Wired.com