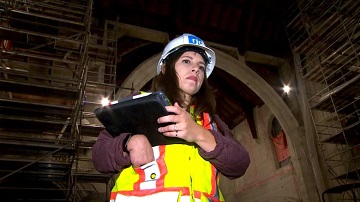 As reported on CBC News, when Julia Halipchuk walks onto a construction site, it’s clear she’s one of the people in charge.

With a hardhat atop her head and an IPad showing construction designs in-hand, she surveys the day’s work.

But she wasn’t always that confident on a construction site. When she first began her job hunt as a structural design engineer, she searched for one based predominantly in an office.

Halipchuk has cerebral palsy, a breakdown in the neural pathways that can affect speech and movement. In Halipchuk’s case, it affects the right side of her body; she doesn’t have proper use of her hand and walks with a limp.

Because of her condition, she wasn’t sure she could fulfil the responsibilities required of an on-site engineer.

“It probably was rooted in a little bit of fear or cautiousness to make sure that I’m not putting myself out for rejection,” said Halipchuk from inside a gutted St. Andrew’s-Wesley United church in downtown Vancouver — her latest project where she’s the lead design engineer.

Yet despite her fear, she kept getting hired for jobs that required her to be on site.

And through her work, Halipchuk has learned the importance of identifying both her limitations and capabilities and effectively communicating what they are to her superiors.

In Canada, the employment rate for people with disabilities varies depending on the severity of the condition. While 76 per cent of people with mild disabilities are employed, that figure drops to 31 per cent if the disability is severe, according to Statistics Canada’s most recent numbers.