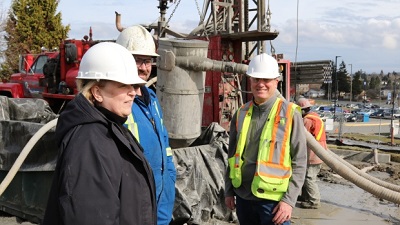 In Nanaimo, B.C. — a city built on coal — a long-abandoned mine will soon become the heat source for a new university building.

Salt water from the flooded shafts of the Wakesiah mine, which run 135 to 180 metres beneath the Vancouver Island University campus, will be pumped to the surface to extract warmth in a geo-exchange project that has attracted international interest.

“We’re going to…push it in through a heat exchanger and send it back down into the mine.” Alan Cumbers, associate vice-president of facilities and ancillary services for VIU, told On the Island host Gregor Craigie.

Cumbers said the Wakesiah mine operated from 1918 to 1930. It’s one of dozens of coal mines that operated around the port city from the late 1800s, with the last one closing in 1986.

The geo-exchange system, which is expected to be operational within the next few months, will heat and cool about 20 per cent of the buildings on campus, including the new health and science building.

Unlike geothermal energy, which extracts heat as hot water or steam from deep in the earth’s core, the geo-exchange process pumps water from much shallower depths.