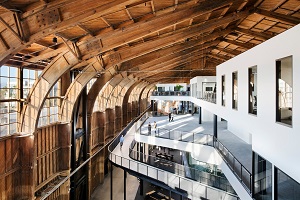 Google expanded its LA presence last year, repurposing a historic airplane hangar to create new office space, and the results are nothing short of stunning.

The hangar, which once held the famed Spruce Goose plane, as it was derisively called, has been out of use for years. The Spruce Goose was the largest wooden plane ever built, due to wartime shortages during World War II. It flew just once, for under a minute, in 1947. It was once owned by filmmaker and pilot Howard Hughes, who also helped design the plane.

Now, the hangar where the Spruce Goose was kept for over 30 years has a second life as Google’s LA office. Google worked with sustainable architecture firm ZGF to create a design that feels new and classic all at once. Take a look:

See all the photos on BusinessInsider.com