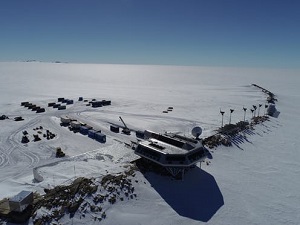 As a scientist investigating climate change, I’m embarrassed by the high carbon footprint I have when I travel to, and work in, Antarctica. Researchers based in the UK regularly take four or five flights to reach the continent and the stations we visit rely on electricity from fossil fuels. Our food is shipped in and our waste is returned by ship to South Africa, South America or New Zealand. When we venture further afield for research and set up a temporary camp, a portable generator is flown in with us, along with our snowmobiles.

Antarctica is the most remote and inhospitable place on Earth, so it’s no surprise that people based there have struggled to break out of convenient habits. It’s cold. There are 24 hours of darkness in winter. Icicles build up on solar panels operating during the summer months and the concrete foundations for wind turbines won’t set in the cold. It’s expensive to ship in renewable energy components and it’s difficult to find warm and dry places to keep large batteries for storing energy.

These challenges are real, and yet, I’ve seen how they can be overcome at Antarctica’s only zero-emission research base, the Princess Elisabeth Antarctica Research Station in East Antarctica. The base is staffed during the summer season from October to March, when the majority of scientists – like me – conduct their research.

Dreamt up by the Belgian explorer Alain Hubert during his transantarctic crossing of the continent by kite ski in 1998, and constructed by the International Polar Foundation and its many partners, the Princess Elisabeth station has welcomed researchers since its first 2008-2009 summer research season.