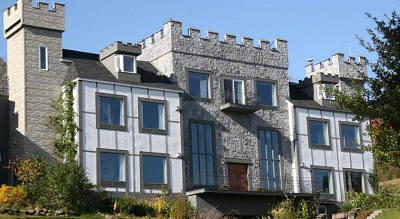 After 8 years on the market Cape Breton castle finally sells

A real-life castle that has been on the market for nearly eight years has finally been sold.

Castle Moffett in Bucklaw, N.S., originally hit the market for a cool $3 million, but has since dropped dramatically to just under $850,000.

“We’ve been asked not to disclose (the price). I’ve seen everything on Facebook from $180,000 to $5 million. Neither is correct. It’s somewhere in between,” says co-owner Debbie Gracie-Smith.

Gracie-Smith and her brother, who are originally from Alder Point, N.S., bought the castle for a business venture.

“We thought a B&B made sense because it’s a beautiful island and seems to be getting more popular with tourism,” says Gracie-Smith. “One of the reasons is because every time we have a big family reunion, we always wonder where we’re going to have it because the family is so large.”

The nearly 10,000 square foot home sits on 200 acres of rolling hills overlooking the Bras d’Or Lake. The house itself features several wings and sits over top of a babbling brook.

Gracie-Smith says there are 11 bedrooms, 14 bathrooms and 14 fireplaces. It was built for Linda Moffett by her late husband Desmond as an anniversary gift in the early 1990s.

“There’s so many wonderful memories here. It’s a treat. It’s fun. I enjoy every day,” Moffett said five years ago.