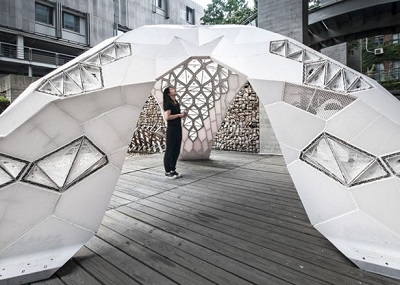 How 3D printing is disrupting the architecture and design industry

Three-dimensional printing is one of the most talked-about technologies of this decade. Some consider it the beginning of the third industrial revolution, while others point out the constraints of the technique. Is 3D printing changing our architecture, and is it the way we’ll design our homes in the future? Below, we look at the phenomenon of 3D printing worldwide, including a delicate resin pavilion in China, classical-design-inspired concrete beams in Italy and buildings that “think” in Germany.

The technology of 3D printing was invented by Chuck Hull, an American engineer. He initially called the new process stereolithography and patented it in 1986. The technique links molecules using laser light to form polymers into solid shapes.

Initially, industries such as automotive manufacturing used the technology for what became known as rapid prototyping. The advantage was that no molds were required and there was no waste, unlike in milling, where a shape is cut and the material around it is discarded. In 3D printing, objects are constructed layer by layer. The idea stems from printing with ink; in that process, the ink lies on top of the paper. If the process was repeated time and again, but with more solid materials and a slight shift to create movements in the layers, a 3D printing effect would occur.

Materials used in 3D printing range from the more common synthetic resins and plastics to steel and concrete. Some are experimenting with natural materials such as bamboo, wood and natural stone waste. Small versions of 3D printers are finding their way into designers’ studios, schools and private homes.

But some synthetic materials used for printing are suspected of emitting toxins. In the course of an experiment, a doctoral student at the University of California at Riverside found that her zebra fish were dying in the container she had printed. A research team then tested the products of two of the most common 3D printers and discovered that the toxicity levels of both were quite alarming. Researchers worldwide are working to find safe materials and techniques and caution that the printers should be used in well-ventilated places.