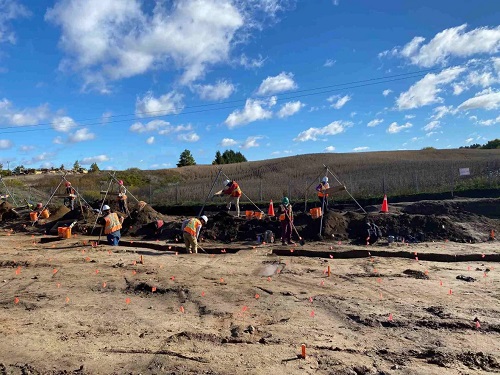 Carbonized seeds, pottery and spearheads are among thousands of Indigenous artifacts that have been discovered at a road construction site in Kitchener over the past few months, according to the company in charge of the project.

Work slated to begin along Fischer-Hallman Road in the spring was put on hold after evidence of a longhouse and a village, as well as nearly 1,000 artifacts, were discovered in the area.

“A feature would be a settlement pattern, it provides you evidence of the actual human activity,” explained Barbara Slim, archaeological lead with Wood PLC. “In this case, it would have been a hearth, a fire pit.”

Projectile points, like the arrowheads, date back the Late Archaic and Late Woodland time periods, said Slim, while the pottery is typical of a Late Woodland Middle Ontario Iroquoian village site.

The carbonized corn and bean seeds are “very rare,” she said, and date back to sometime between 1300 and 1600.