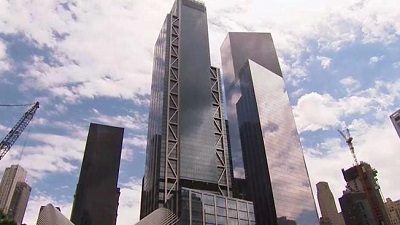 An 80-story office building set to open this week at the World Trade Center will be the third completed skyscraper at the site where the twin towers stood.

Monday’s ribbon-cutting for the 1,079-foot (329-meter) 3 World Trade Center marks a major step in the rebuilding of the site, stalled for years by disputes among government agencies, trade center developer Larry Silverstein, insurers and 9/11 victims’ family members who wanted the entire site to be preserved for eternity as a memorial.

The new $2.7 billion building, designed by Pritzker Prize-winning architect Richard Rogers, has been the fifth-tallest building in New York City since construction topped out in 2016.

That designation seemed elusive in 2009 when the Port Authority of New York and New Jersey, which owns the trade center site and was battling with Silverstein over costs associated with rebuilding, sought to reduce 3 World Trade to a four-story “stump.”

After arbitration in the dispute between the developer and the property owner, construction started in 2010 but was halted at seven stories due to a lack of financing.

The financial situation improved in 2012, Silverstein said. “It was like somebody came to us and said, ‘The curtain has gone up, you can now access this pool of financing.’”

The Port Authority’s current executive director, Rick Cotton, joined the agency in 2017 and missed out on the fights with Silverstein. Cotton said the opening of 3 World Trade is “really a major transformative step in the ongoing evolution of the World Trade Center from a construction site to an active, living, breathing campus of office buildings and a memorial.”

Zigzagging beams down the east and west faces of the tower look like an embellishment but are actually structural components that will allow for column-free spaces inside. “It’s a load-bearing system,” said Carlos Valverde, a Silverstein Properties vice president who has supervised construction of the building.

The skyscraper boasts an annealed glass exterior with 10,000 glass panels that have been cooled slowly to reduce internal stress, meaning the glass shouldn’t break into shards if it is struck.