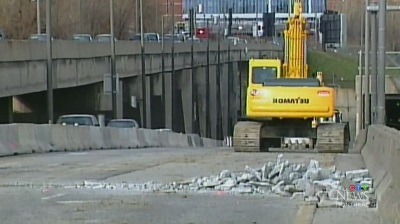 As reported on CTV News, it’s taken 18 years, but people living in the shadow of the Ville-Marie Expressway have finally received their long-awaited payout.

Some 1,200 people who were part of a class-action suit over excessive construction noise have each received about $2,900 as part of the $3.5 million settlement.

The construction on the Ville-Marie took place between 1998 and 2000, and during that time those living near the highway endured the nearly constant sound of jackhammers and other construction equipment at all hours of the day and night.

The battle for compensation took nearly 20 years to resolve, thanks to the tireless efforts of Peter Krantz, a resident who lives on St-Antoine St. and Atwater Ave.

“Imagine getting a jet engine put in your backyard, and that engine gets turned on, and it’s running 24 hours a day, seven days a week. That’s what it was basically,” he said in an interview with CTV last year.

Krantz succeeded in having the City of Westmount install a decibel meter and used the readings as evidence in the lawsuit against the Quebec government and the construction firms.

The case was settled last year.

Though the ultimate payout is not a lot of money, Krantz said Tuesday that it’s still a great victory and he’s proud that thanks to the lawsuit, construction behaviour has changed.