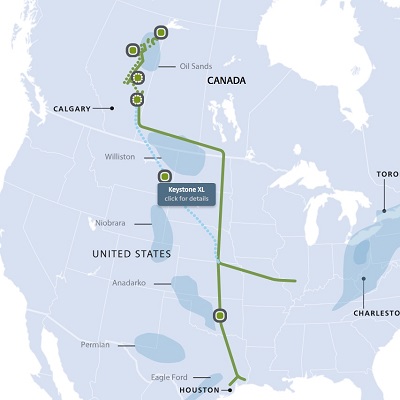 TC Energy Corporation announced today that Keystone XL has reached a project labor agreement (PLA) with four leading U.S. labor unions that will inject hundreds of millions of dollars in middle-class wages into the American economy, while ensuring this pipeline will be built by the highest-skilled and highest-trained workforce.

TC Energy is also working with labor to establish a unique Green Jobs Training Program to help union members acquire the specific skills needed to work in the developing renewable energy sector. The company will contribute approximately $10 million, recognizing the 10 million-plus hours anticipated to be worked on Keystone XL by union workers, to establish new training courses for current and future union members in North America.

“We are proud to partner with these union trades and craft workers to ensure this pipeline will be built by qualified professionals with specialized skills to the highest safety and quality standards,” said Richard Prior, President of Keystone XL. “We are especially proud of the new Green Jobs Training Program, which is an investment in thousands of current and future union workers.”

“We’re proud to reach today’s agreement with TC Energy that will put UA members to work on this project, bringing safe and efficient energy to American families,” said Mark McManus, General President of the United Association of Union Plumbers and Pipefitters (UA). “This project will bring good paying jobs to our members, all while keeping energy costs low and delivering a boost to local communities and their economies. We’re ready to get to work.”

Project construction will support the creation of 42,000 family-sustaining jobs in the U.S, including more than 10,000 high-paying construction jobs that will be filled primarily by union workers. Keystone XL pipeline construction will generate $2 billion in earnings for U.S. workers, according to the 2014 Final Environmental Impact Statement done by the U.S. State Department.