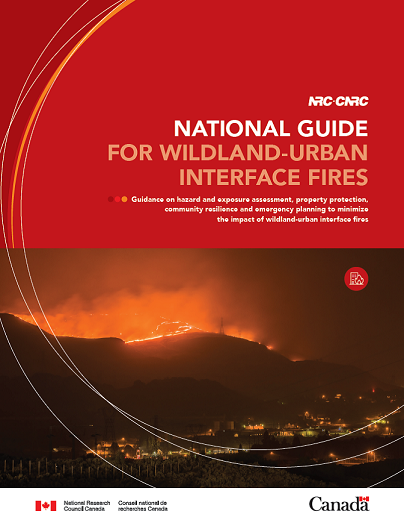 When wildfires spread to and through the Wildland Urban Interface (WUI), an area where houses and other human developments meet or are mixed with wildland vegetation, the consequences can be extreme, resulting in significant losses and imposing substantial evacuations.

Every year, wildfires pose an immense threat to buildings, infrastructure and communities at large. For example, the 2016 Horse River fire in Fort McMurray, Alberta, destroyed nearly 1600 structures and forced the evacuation of nearly 80,000 people. Presently, over 300 wildfires are burning across western Canada, including a fast-moving fire which has devastated the village of Lytton, British Columbia.

The threat posed by WUI fires is growing as urban areas expand into wildlands, rural areas increase in population, and wildfires become more frequent and severe due to climate change. In the coming decades, the risk of WUI fire is expected to increase both in regions of Canada with a long history of wildfires and in those with no such history.

A National Guide for Wildland-Urban Interface Fires, the first of its kind for Canada, was recently published by the National Research Council of Canada as part of the Climate-Resilient Buildings and Core Public Infrastructure (CRBCPI) initiative, funded by Infrastructure Canada.

The Guide is intended to mitigate the growing risk of damage and loss due to WUI fires by improving the resilience of buildings, infrastructure and communities to wildfire. Drawing on recent wildfire research, existing codes, standards and guidelines, and insights gained from international experts, the Guide provides support for diminishing the risk in the WUI areas of Canada, including information on:

This guidance will help to minimize the impact of WUI fires by reducing their likelihood and severity, inhibiting their spread, and improving the effectiveness of community response.

The Guide is a comprehensive resource for anyone working towards minimizing the impact of WUI fires on buildings, infrastructure and communities and improving their resilience, including local governments and authorities, planners, emergency managers, developers, insurers, and property owners.